So what is this site all about? In short, this site aims to provide a place for British Aikido clubs to help one another, share information and (I hope!) eventually to organise events that we can share too. 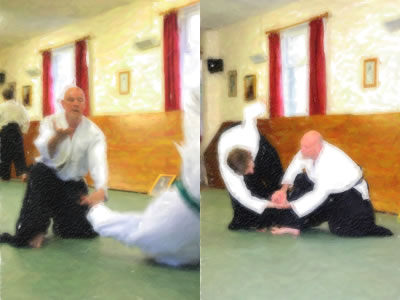 This project was started by Huw Collingbourne, sensei at the Hartland Aikido Club in North Devon. We are a very small and rather remote club that practises way out in the wilds of the North Devon Countryside. Unfortunately we are situated at a considerable distance from the other clubs in our 'parent' organisation, The British Ki Aikido Association.

In fact, our closest contacts in 'real life' (rather than by phone or email) are with other clubs from other organisations. For example, I regularly practise with the aiki-jo club in Bideford which is part of a different Aikido organisation from a different Aikido tradition (Iwama). Not all small, independent or remote Aikido clubs are that fortunate. Maybe you go to a club that has no other club nearby. Or maybe there is a club nearby but the sensei may not be open to practising with other clubs or styles of Aikido? If that's the case, we might be able to help. Your club isn't the only one that has had to deal with the problems that afflict small clubs and dojos. Lots of us have had to get to grips with the problems of running a club on a shoestring, trying to attract (and keep) new students, creating web sites, dealing with insurance - or just finding opportunities to get together and share our Aikido practice with other people. That's what 'Aikido Dojos UK' is all about - making contact, sharing ideas, helping one another out.

First and foremost, this is a group of Aikido friends. This is not an 'association' - there is no membership, no fees and no 'red tape'. You can participate in this site if you belong to an established association or if you have a tiny, independently-run club. And there is no restriction on the 'style' or 'school' of Aikido. All we ask is that you are open to clubs from other styles and other organisations.

Why not join us? Send an email to me, Huw Collingbourne, (details on the Contacts Page). Maybe you would just like a listing for your club on the Aikido Clubs page? Or maybe you would like to take a more active part by contributing posts to this web site? Just drop me a line and let's talk about it.

Best wishes to all,
Huw
Posted by Huw Collingbourne at 09:54